C GOLD – GAME 1 IS IN THE BOOK FOR COLLEGE 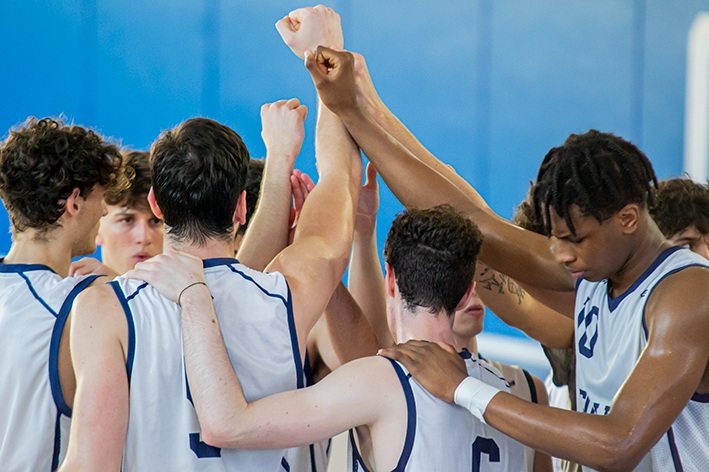 Big win for the young collegiali of coach Stefano Di Cerbo who, after an extra time, stop 86 to 79 Pizzighettone in the first act of the playoff semifinal series.

The start is the prerogative of College, who manages to move the ball both in and out of the area, building excellent shots. In defense the pressure is good and, after a quarter, the scoreboard says 25 to 17 College. The second fraction sees coach Giubertoni fix something and Pizzighettone responds with experience. Gorreri warms his hand from beyond the three-point arc and at the long break the advantage of College is just two lengths, on 41 to 39. In the third period the defensive attention of the hosts falls, which concede too many 1 on 1 in Pizzighettone having several defensive amnesias always punished by the Lombards. The guests take advantage and put the arrow up to 57 to 64 at the end of the third quarter. College, here, has the ability not to disunite but, on the contrary, to compact and play as a team on both sides of the court. Airaghi is on all loose balls, Boglio scores continuously and Pizzighettone is in trouble. The guests score just 6 points in 10 minutes, College has the victory ball in his hands, but missed the shot. Pizzighettone, in turn, shoots to win, but Gorreri’s conclusion is also on the rim: it ‘s overtime at 70 to 70. In the 5 ‘of extra time Boglio takes College on his shoulders, scores with a foul and the feeling is that physically the biancoblu have something more. Pizzighettone remains clinging to the match with Foti, but there are too many minutes without the baskets of the guests, who suffer the athleticism of Okeke and Ferrari in rebound. Game one is in the book for College, 86 to 79 the final. Now it’s already time to reset, on Wednesday evening, at 21:00, in Pizzighettone, the duo ball of the second act of the series.